The Three Pillars of Broadcast Control

Whether you work in live production at large broadcast facilities, OB broadcast remotes or a live-to-tape studio environment, the aim is always to produce great content. TallyMan Advanced Broadcast Control simplifies complex broadcast workflows to allow operators to focus on the task at hand.

Consumers expect seamless high quality from broadcasters. They are also increasingly demanding in production values: where once a single camera would suffice, now there is an expectation of multiple cameras, graphics and effects. And this is happening in an environment of increasing budgetary pressure.

If we look to other industries, we see a reliance on automation, particularly for repetitive tasks. It releases staff to carry out the creative and management work. In some areas broadcast has already adopted automation: channel playout, for example. But there are many more areas where smart automation could make operations slick, professional and cost-effective.

The vast majority of broadcast devices have an established and proven control layer. This is independent of the signal path, so it does not matter if you have legacy SDI equipment, IP-connected equipment, or a mixture of the two. Here we are just talking about control.

An obvious example is a production switcher. The control panel may have literally hundreds of buttons, but the connection from the panel to the electronics rack will normally be a single ethernet cable, rather than a very fat multi-core. System control is in software.

As I said, in playout automation we have been using that software control layer for decades. A central computer issues commands to the server, the switcher, the DVE and the graphics device to make things happen with frame accuracy.

It is easy to identify other applications where a single system controller could operate multiple pieces of equipment to perform complex tasks. You might want to control remote studios from a central location, for example, with the cameras, lights, microphones and graphics all under one user interface.

Given a sufficiently intelligent logic layer in the controller, and the ability to design appropriate user interfaces, then it is perfectly possible to hit our first target of seamless high quality. There is no reason why a simple unified control system should not deliver the professional output that we expect from fully equipped studios.

Even if we are aiming for simplified control, there is no reason to limit creativity. Indeed, it is because a well-designed solution offers an intuitive user interface that we can add greater flexibility. If cameras can be matched and switched remotely, there is no reason why a contribution studio should not be multi-camera rather than single camera, for example.

The logic layer can also link devices together to further simplify operations. Graphics lower thirds can be overlayed, using templates and simply dropping in the names. The captions can be linked to cameras, or manually cued and timed to clear. Given the ability to create appropriate control surfaces, a unified control system can ensure creative production freedom and the highest technical quality.

Our third requirement today is that we achieve this within tight budgetary constraints. The most obvious way we can achieve this is by keeping experienced staff engaged in useful, productive and interesting work as much as possible. If we can eliminate repetitive tasks the work will be more fulfilling; if we can achieve high utilisation of staff we will control operational expenditure.

TSL has developed an extremely powerful, extremely easy to use unified control system, Tallyman. Its control layer is capable of anything from direct router control to the creative management of live remote productions or configuring complete outside broadcast trucks at the touch of a button. Its user interface design toolkit is remarkably simple to use and allows you to customise virtual panels for every user.

Tallyman is already proven in high profile installations around the world, popular because it delivers against the three demands of the industry today: seamless high quality, high production values and cost control. 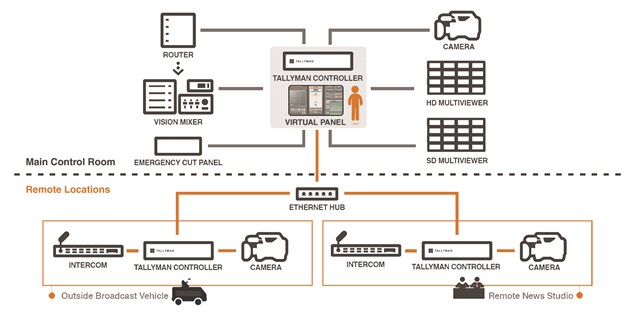