An Introduction to Routing Control
Scroll

An Introduction to Routing Control

Routing control sits at the very heart of all advanced control systems. Users need to be able to manage signal routes throughout a facility. This might include routing video, audio and data signals between the various elements of a network, for example:

To achieve this effectively, users need a system that will send a signal precisely where it’s needed to maintain clear and efficient production. TSL’s router control functionality provides the flexibility and control to build an appropriate signal path for any given operation.

Are you a TallyMan user? Then access our How to Guides here to learn how to build association routers, control PTZ cameras and much more.

Instead of the traditional requirement to route one video signal to one destination, ever-increasing video quality and resolution mean one destination is no longer enough. Broadcasters now need more bandwidth, for example, to group 4x 3G data inputs to make a 4K source. This can be achieved by routing between blocks of quad inputs and outputs, by condensing 4 ‘levels’ in an Association Router into 1 destination. 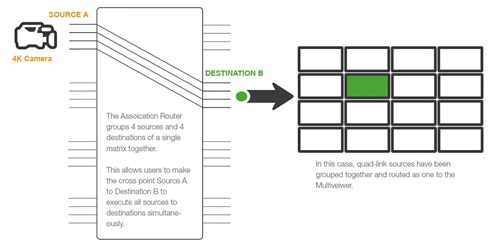 TABLE ROUTING
The table route is a simple mechanism by which a crosspoint made within a connected matrix can be used to trigger another crosspoint. This triggered crosspoint can be made within the same matrix or within another matrix. 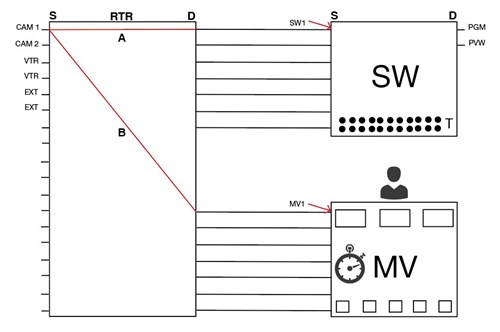 Protocol conversion of routing control between third party routers:
A controller using SW-P-08 protocol, for example, might be required to control a matrix using Quartz protocol. In this case you can table route from an SW-P-08 Dummy router to a Quartz router within TallyMan.

The reason you would use a table route as opposed to a copy route is that the size and mapping of controller and router frame may be different.

This means you can configure the table route to take any source routed to a switcher input and route it to a multiviewer input.

For RaceTech UK, TallyMan really started to come into its own when addressing some particularly complex logic requirements that the technical team knew a lot of router controllers at the time could not handle. The system was a combination of two cascaded routers and they wanted all the preview push-downs for the CCUs to be routed in a smart way so the operators could change them around really easily.

The capabilities of the touchscreen and the control panels rendered the TallyMan a strong foundation for this project and the end-result is a versatile implementation that uses TallyMan to deliver full signal flow management including grouped signal routing (with full breakaway).

Automatic audio-follow-video across devices by different manufacturers from a single control surface made it possible to select the equipment that most closely matches RaceTech’s requirements. All this functionality runs in concert with the tally, UMD and router control TallyMan is well known for. In addition, the team worked on fashioning some fresh functionality, including the ability to provide freely assignable joystick controls and add camera assignment in the controls.

In 2019, ES Broadcast, on behalf of Creative Technologies, deployed the TallyMan Control System for three UHD Portable Production Units (PPUs) and one HD 3G PPU. The new PPUs were designed to combine cutting-edge technology with simplified operability and a familiar system architecture that allows engineers to easily transition between new and existing systems.

At the Lutheran Church of Hope in the US, Chief Systems Engineer, Jim Sheppard, challenged his team to keep up with the demands required to support productions. In the process of revamping much of the Church’s AV infrastructure to accommodate a transition from SD to HD, as well as the demands of on-demand content infrastructure and streaming, they were looking to put in place a system that would allow them to stream to multiple locations at the push of a button, while keeping the process simple and manageable for all our volunteers who are not necessarily AV experts.

Thanks to TallyMan’s cross-platform capability, it can integrate with the different types of routers that the Church has in the different campuses. The engineering team were then able to automate and simplify complex multi-step operations into simple push button control for their teams of volunteer operators, freeing up Jim’s team, professional engineers, to focus on technical triage and the task at hand, without worrying about the underpinning systems.

“In particular, we were looking for a control system that would help us coordinate all our critical components to ensure that our volunteer operators are aware of and can easily instruct all the relevant systems at pertinent times throughout the production. From the operator’s perspective, it’s the same interface. It makes it look the same even if the back end is different. That’s why we didn’t want to use a proprietary tally system.”

The continuing pressure on production budgets will accelerate the deployment of remote production solutions. From a control perspective, this is a maturing technology and for news and live productions where it is lower cost (or just safer) to have engineering and production staff remote from the studio, this is an attractive solution.

“The conversation about broadcast sports solutions and applications today is heavily focused on remote production, and all the major events and broadcasters are seeking solutions that are quick and simple to implement,” explains Mark “Our control offerings allow customers to quickly set up systems and take control of their configurations – making TSL’s control platforms incredible versatile. At TSL Products, we strive to provide our customers with reliable gear that simplifies and expedites remote command and control over production capabilities. This is especially important for sports productions, where there’s an audience of millions, and no margin for error.”

“We also strive to establish seamless interoperability with all our control solutions. The move to IP is driving the need to be able to control devices differently, moving to edge device control, which requires a whole new set of standards. We are currently working on this with other key technologists via the AMWA / NMOS initiative.”

As most equipment manufacturers are beginning to adopt either NMOS and Ember+ as the control standards to support SMPTE ST2022-6 and ST2110, TSL’s adoption of these standards will be included within the ecosystem to allow intuitive and powerful control and tally across SDI, hybrid and fully IP infrastructures within a single package.

Empowering our customers with knowledge

Since each company has its own workflow, TSL set up a worldwide Training Program that arms engineers with the knowledge they need to configure the system themselves, saving time and budget for existing and future projects.

The series debuted in Brazil in 2018, taking place over two days and attended by engineers from CNT, TV Globo, Record, Band, Globosat, ESPN, FOX, SKY, BroadTV, Seal, LineUp, among others. Led by TSL Customer Support Engineer Ben Bate, and Control Product Manager, Tom Pollard, the series has been taken around the world and delivered to customers including Diversified in the U.S., Live HD Abu Dhabi and MBC in the UAE, and Ideal Systems, Benchmark Singapore and Astro in Malaysia.