Imagine a major AV-based conference facility, running multiple networks with various devices from different manufacturers. The engineering team have the difficult task of managing these disparate networks and devices, and the operators struggle to instinctively use the system when running presentations and streaming content to the outside world.

This major financial institution chose to address these issues by implementing a control system that can streamline their productions and allow them to take full control of their auditorium where they do presentations.

The customer also creates recordings for other parts of the business internationally, offering ‘Fire Side Chats’ which bring in experts for one-to-one conversations, all while live streaming to the rest of the business. The business also rents out this space, and so the set-up has to be simple enough to manage so that they can hand over to a third party. The varying technical aspects to the system were one of the significant reasons as to why this customer deployed TSLs Advanced Control System. Being one of the truly independent systems available on the market, the customer can bring together a whole variety of equipment across their networks.

Dive Deeper With TSL's Insights Hub - The Intersection of AV and Broadcast.

Simply enter your email address below to gain instant access.

The adoption of IP-based connectivity has been big news in both broadcast and professional AV for many years now.

Familiarity with the new networking technologies and the ongoing need to support legacy formats have led some customers to move ahead with all-IP environments. Consequently, it’s not surprising there has also been a strong trend towards the creation of hybrid facilities that can accommodate – for example, SDI alongside new IP-based technologies like NDI and ST 2110.

This last-named approach is exemplified by an installation undertaken at a UK facility, owned by a major investment bank and global financial services company. The project focused on a newly built auditorium intended for a wealth of presentations – ranging from conventional in-person events to live-streamed fireside chats.

This called for AV systems and networks consultancy, Kromers, to deliver a control infrastructure that could provide top flexibility for both in-house teams and external clients. Christopher Hawes, principal at Kromers, recalls that the client’s multimedia team was going down a more “tried and trusted” route when the team came on board, which involved a closed ecosystem based around products from one vendor. “We encouraged them to look further afield and test some of the new solutions out there, including those that could work with NDI and ST 2110.”

Ultimately, it was decided the best course of action was to bring SDI, NDI and ST 2110 together, making it easy for users to select between any source and have “all the magic happen in the background. The resulting hybrid production environment plays to key strengths of each technology, including the use of NDI to select and provide access to control room monitors, SDI to enable connectivity to HD cameras and graphics systems, and ST 2110 to provide connectivity and management of standards-compliant cameras and other devices in conjunction with Sony’s IP Live System Manager (LSM).

A design of such complexity was always going to require a powerful, easy-to-use control system. “It had to provide the kind of functionality the customer was using most of the time on a day-to-day basis." says Kromers System Designers Andrew Wilson. "We set up dedicated pages to allow the selection of different sources, as well as signal distribution routes – e.g. to go to the BT Tower, New York office or other worldwide locations.”

“The end result was that we provided about 25 buttons that could cater for 90% of the usage, with deeper engineering expertise only required for the remaining 10% of projects.” Sitting at the heart of the installation is the TSL TallyMan TM1 MK2 1RU, which provides a common platform to universally control all of the core production equipment, including routers, multi-viewers, vision mixers, cameras, media servers and more. Meanwhile, in the control rooms, the customer has access to both TSL Virtual Panels and hardware control interfaces, making access and routing between the different networked systems fast and intuitive. Hawes says there were no competitors to the TSL solution in terms of platforms that could effectively manage NDI, SDI and ST 2110 routing. “We looked at other, more conventional AV systems, but they didn’t have the power of the TSL system for providing unified control and the ability to manage tallys. We also found the TSL equipment very easy to install and work with and the support from the company has been superb.” And it’s a testament to the capability of the TSL solution that in-person support has only been required once since the installation was completed. All of which means that the auditorium has been going from strength to strength, says Wilson.

As might be expected, the auditorium’s live-streaming capacity has proven to be especially valuable during the past 12 months, including for meetings and discussions with contributors located globally. “The system's web interfaces have made it possible to undertake high-level productions involving executives around the world, but have it appear as if they were all being hosted from the main auditorium. It's another aspect that illustrates quite how versatile these facilities can be." 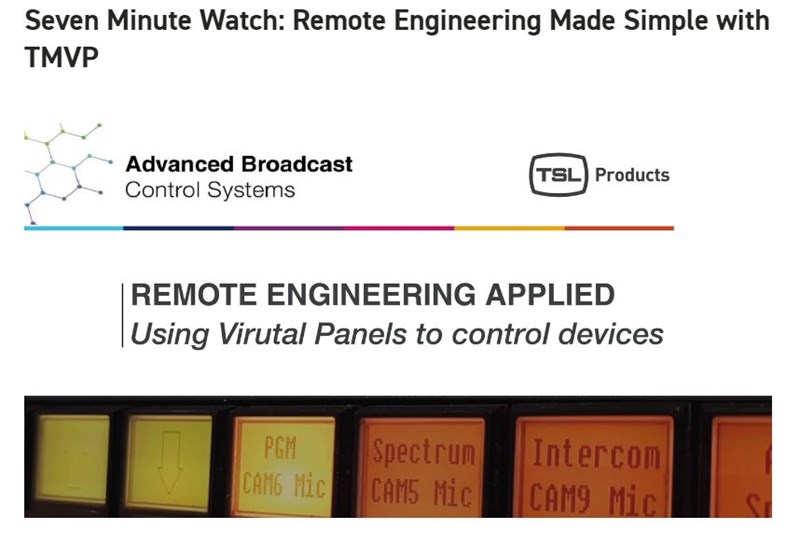