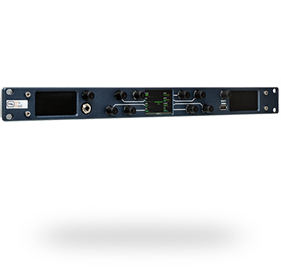 MARLOW, UK – 29 June 2016 – TSL Products, the leading broadcast equipment manufacturer, announced that eight of its MPA Mix-MADI audio monitoring units are being used by BBC Sport as part of the broadcaster’s technical set-up for coverage of the Euro 2016 football tournament. This is the first outing at a major European event for the Mix-MADI monitors. Euro 2016 takes place from 10 June – 10 July 2016 at venues across France.

The set-up for Euro 2016 includes two MPA Mix-MADI units situated in the International Broadcast Centre (IBC) in Paris, with a further five units in the studio which is situated near the Eiffel Tower, and a spare. All of the units will monitor audio output at EVS positions.

The MPA Mix-MADI units are building a solid reputation for simplicity of operation, enabling users to plug in one output to monitor and mix multiple channels rather than scrabbling around behind the desk with multiple cables. The unit produces excellent sound quality, enabling the user to create a simple monitoring mix from different sources on a single unit. The built-in web server also enables all units to be configured, monitored and controlled via an intuitive web interface. The shallow unit depth of 100mm makes it ideal for the broadcast OB environment.

“It’s quite a debut for the MPA Mix-MADI to be chosen as the monitoring solution for this prestigious event,” said Matthew Colman, Product Manager, TSL Products. “It is such a simple system but makes production workflows so much more efficient and precise.  It has earned the confidence of the users and we are confident it will prove its worth on this major project.”

“The TSL PAM2 MK2 gives us the power to monitor loudness for compliance with new broadcast standards, accurately meter audio for many sources and provide phase information. We are very pleased with the performance of the PAM2 MK2 units.”